Last night, 82 players came back to compete for the $144,724 prize pool in Event #5 of the Summer Poker Series! In the end, it was Los Angeles pros Paul Lee and Thu Nguyen who chopped it heads up.  For their efforts, both players took home just under $27,000! Check below for a full list of payouts from the event! Congratulations to Paul, Thu, and everyone else who cashed in the event, and be sure to come out to The Bicycle Casino for more events all summer long! 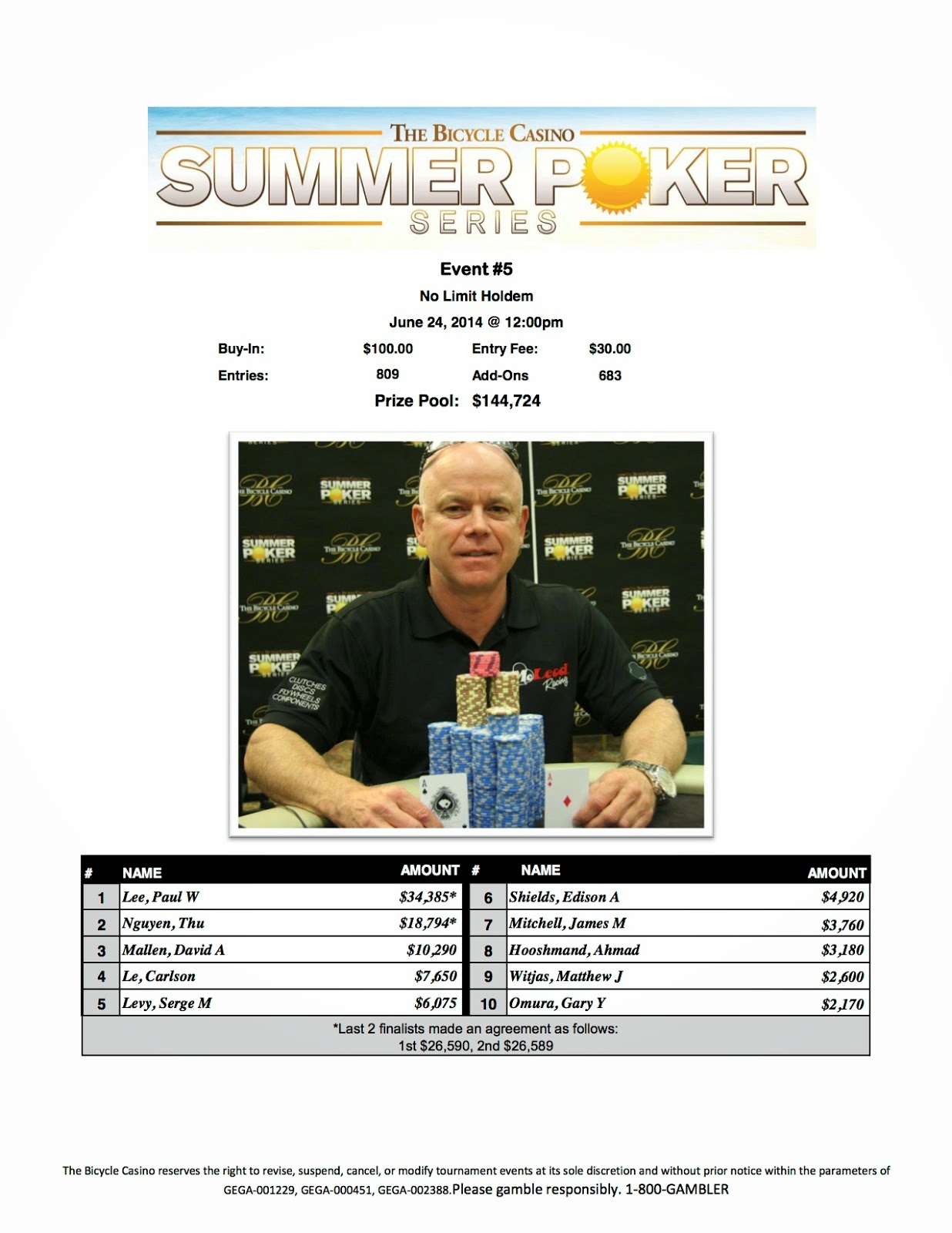 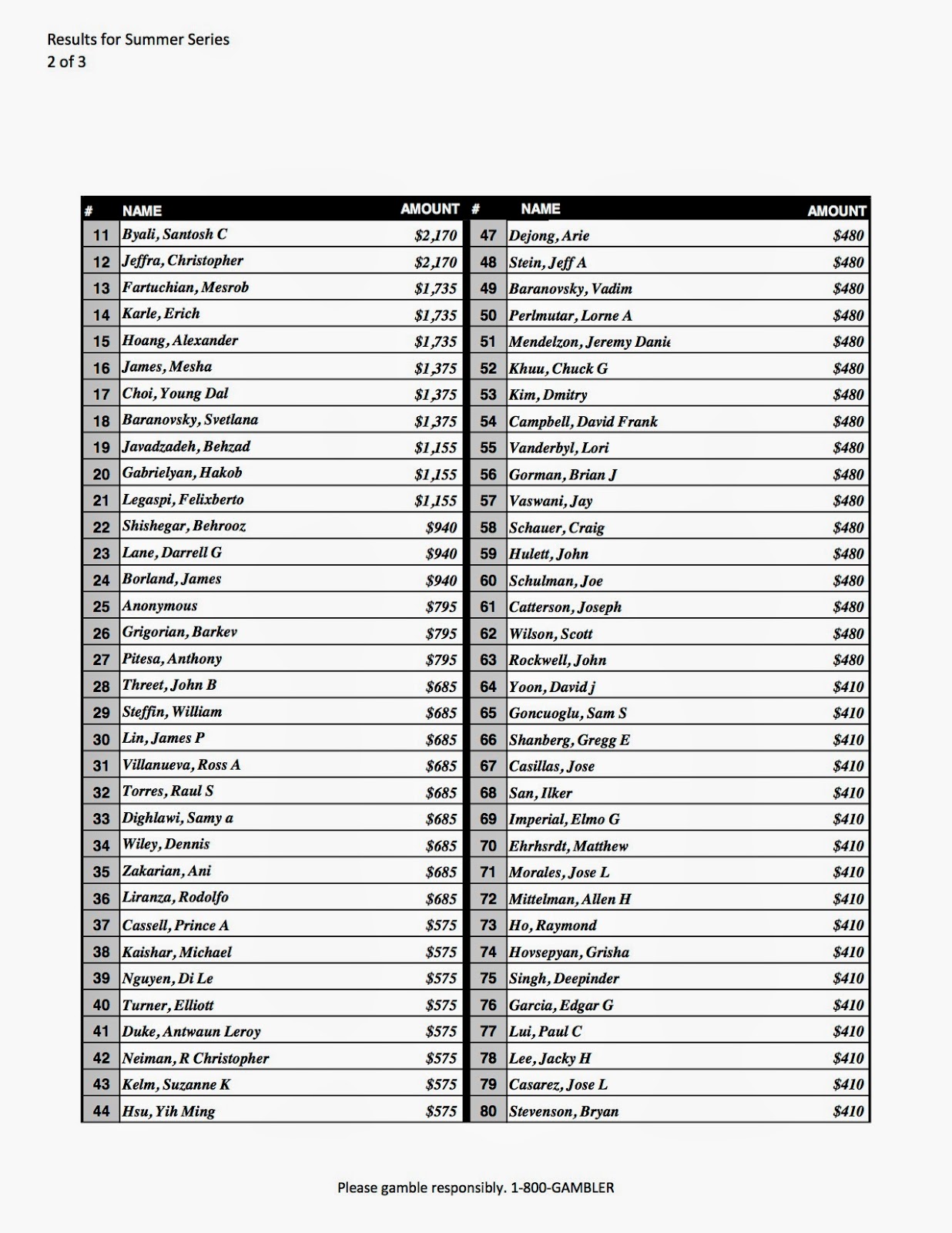 The next installment of the deepstack series of events here at the Summer Poker Series drew 224 players, making for a prize pool of $27,328.  The players agreed to pay the last two bubbles, meaning that 26 players ended up in the money. By the end, it was the top four who chopped up the remaining prize pool, with Edgar Garcia walking away with the most money, $3,403. Read below for the rest of the results, and thanks to everyone who came out to The Bicycle Casino! 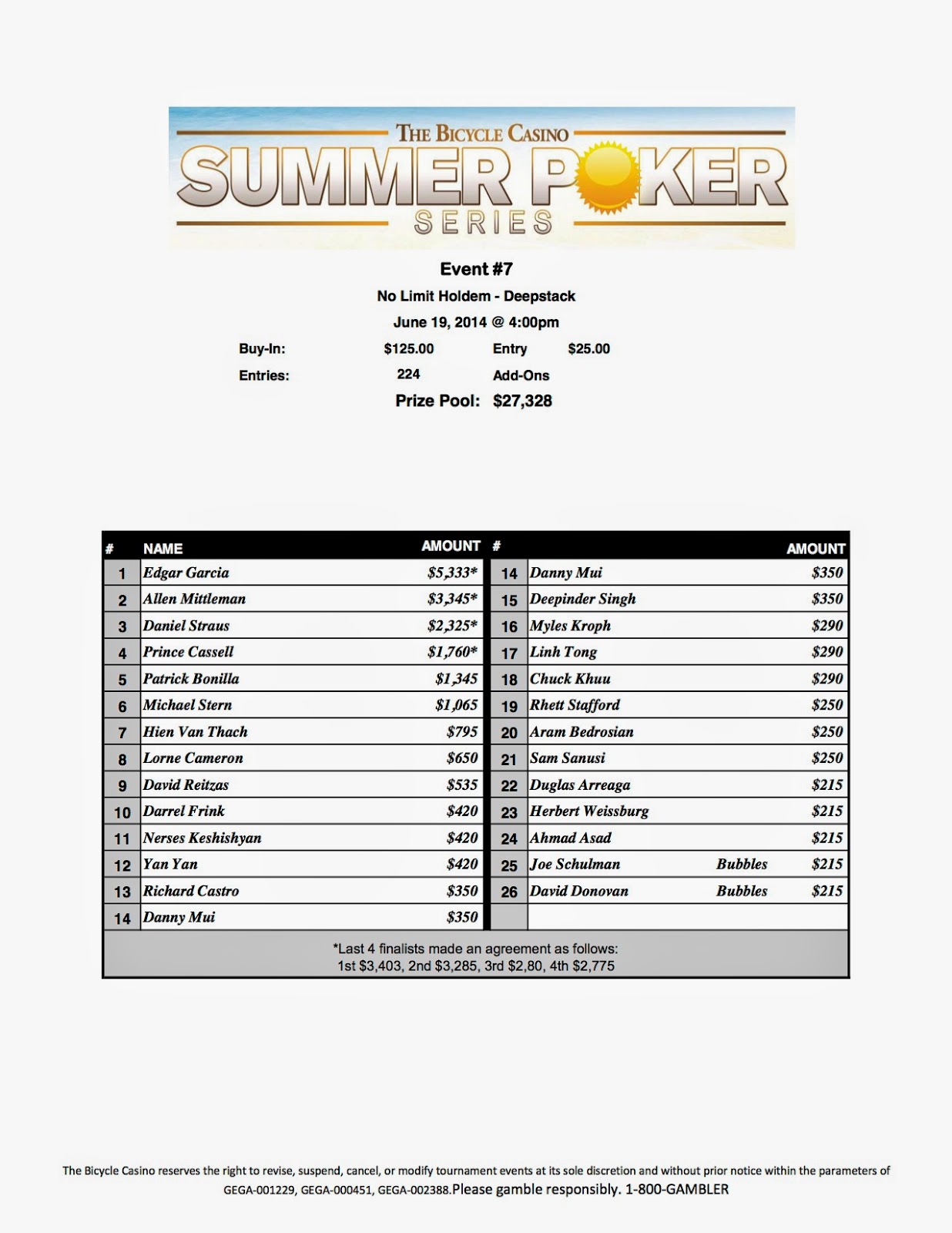 Thu Nguyen and Paul Lee, who were both very close in chips, have agreed to an even chop heads up in Event #5! This means that each player will walk out of the casino with a payday of $26,590! The players also agreed to declare Paul Lee the winner, and you can see his winner's photo below. Be sure to come back tomorrow to read a full winner's report. Congratulations to Lee and Nguyen on a great tournament played, and good night from The Bicycle Casino! 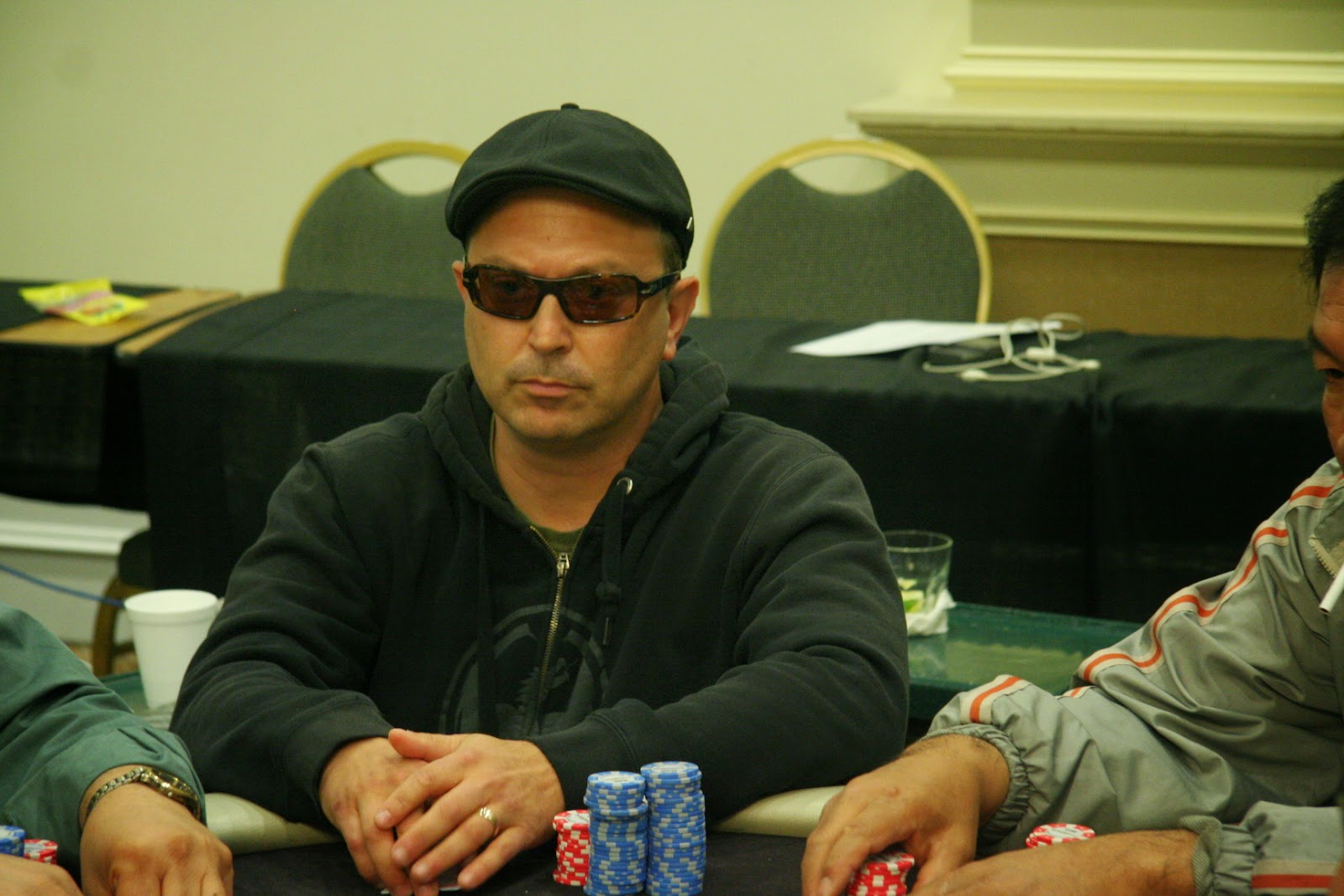 David Mallen got his short stack in with a great hand, [Qc][Qd], but he wasn't thrilled to see that he was in a coin flip with final table bulldozer Thu Nguyen, who held [Ad][Ks].  Mallen faded the flop of [9h][8h][2s], and the [9c] on the turn. However, the [Kh] came on the river, giving Nguyen a pair of kings, and knocking Mallen out in 3rd.

It was quite a run for Mallen, who told us that he's only been playing poker for three months! Perhaps even more impressive than that, Mallen also informed us that he was down to two big blinds in his Day 1 session, as well as earlier today! Congratulations to Mallen on the five-figure score!

Thu Nguyen and Paul Lee are currently discussing a heads up chop. We will let you know what they decide as soon as we hear!
Posted at 12:34 AM No comments: 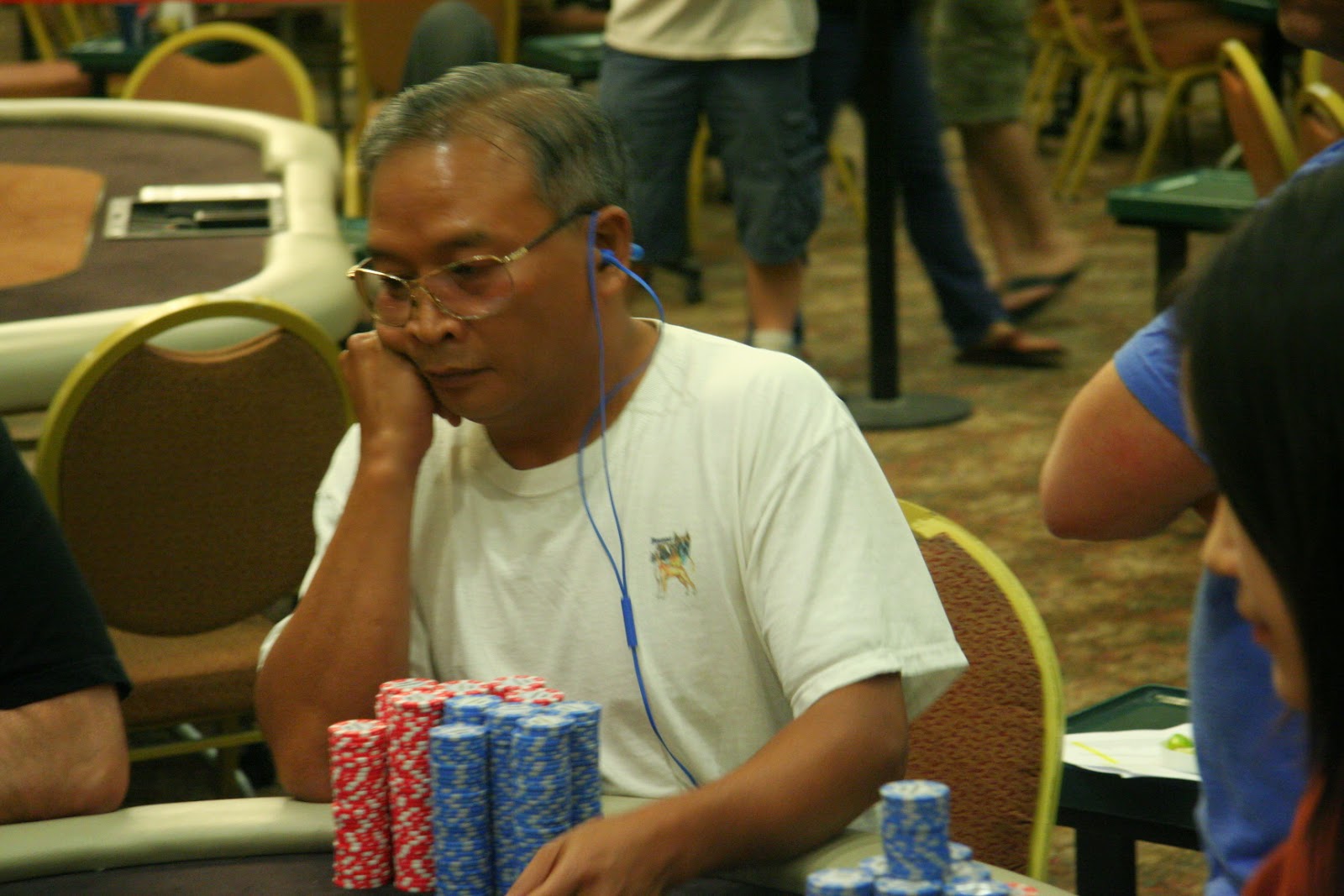 The board completed [6s] and [Jh], and Lee took down the pot to knock out the start of day chip leader.
Posted at 12:29 AM No comments: 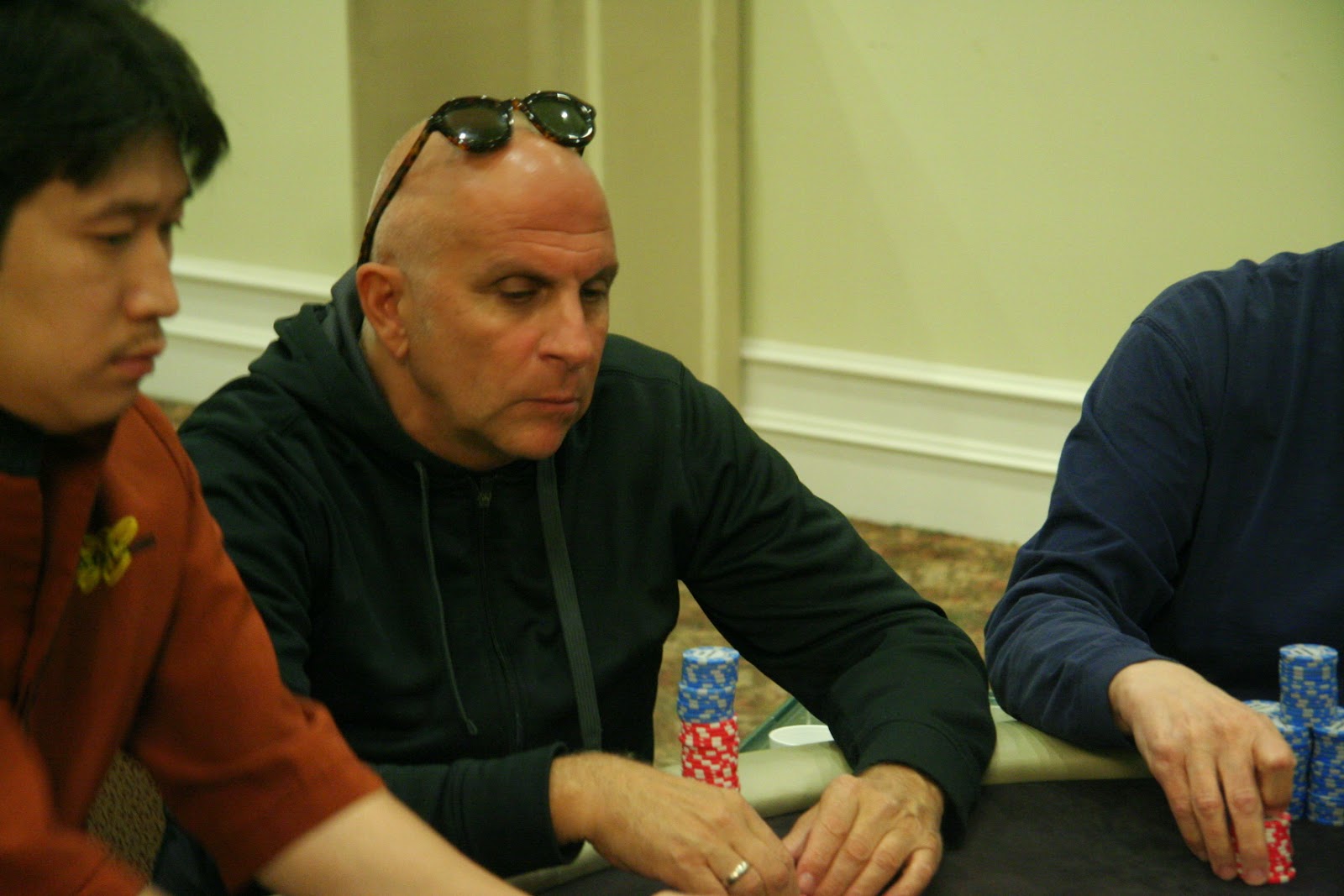 Despite doubling up the hand before, Serge Levy had just 150,000, or 1.5 big blinds, when he made his stand on the button. Thu Nguyen called from the small blind, Carlson Le called from the big blind, and they checked down a board of [Qd][10h][8d][9c][5s].

Nguyen showed [5c][3c] for rivered bottom pair, and amazingly, it was good enough to beat the king high of Le, and the pocket deuces of Levy. Even though he fell short of winning, Levy was all smiles after the bustout, saying he was short all tournament and happy to have gotten this far.

And just like that, we have our final four!
Posted at 12:21 AM No comments: 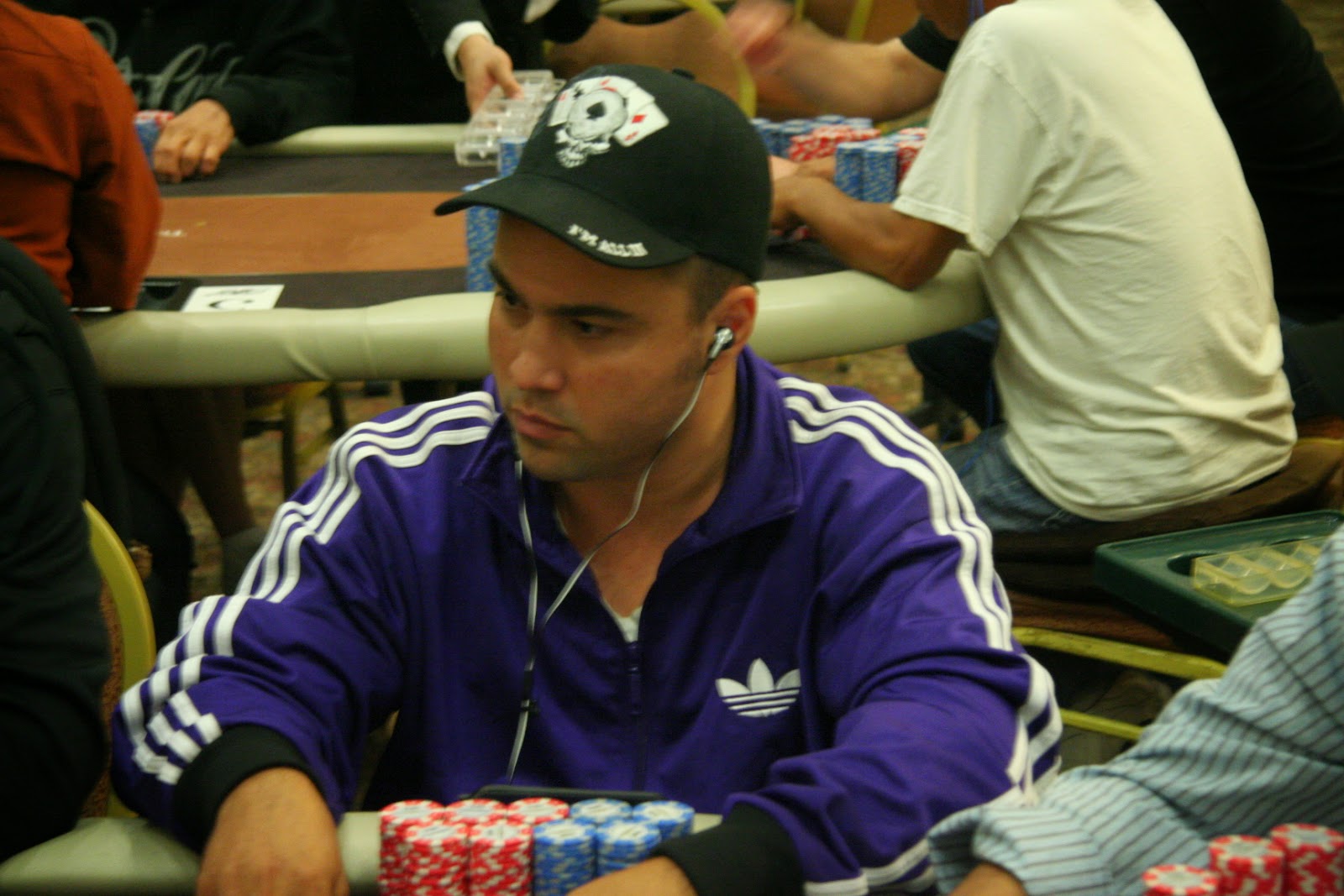 Thu Nguyen raised it up from early position, and Edison Shields moved his last 500,000 in. When it folded around to Nguyen, he announced "call."

The flop brought plenty of action, coming down [Jh][Ad][Kh]. Shields had flopped top pair, but it was trailing the two pair of Nguyen. The [5h] on the turn and the [3s] on the river changed nothing, and Nguyen took down the pot, much to the delight of his rail.
Posted at 12:17 AM No comments: 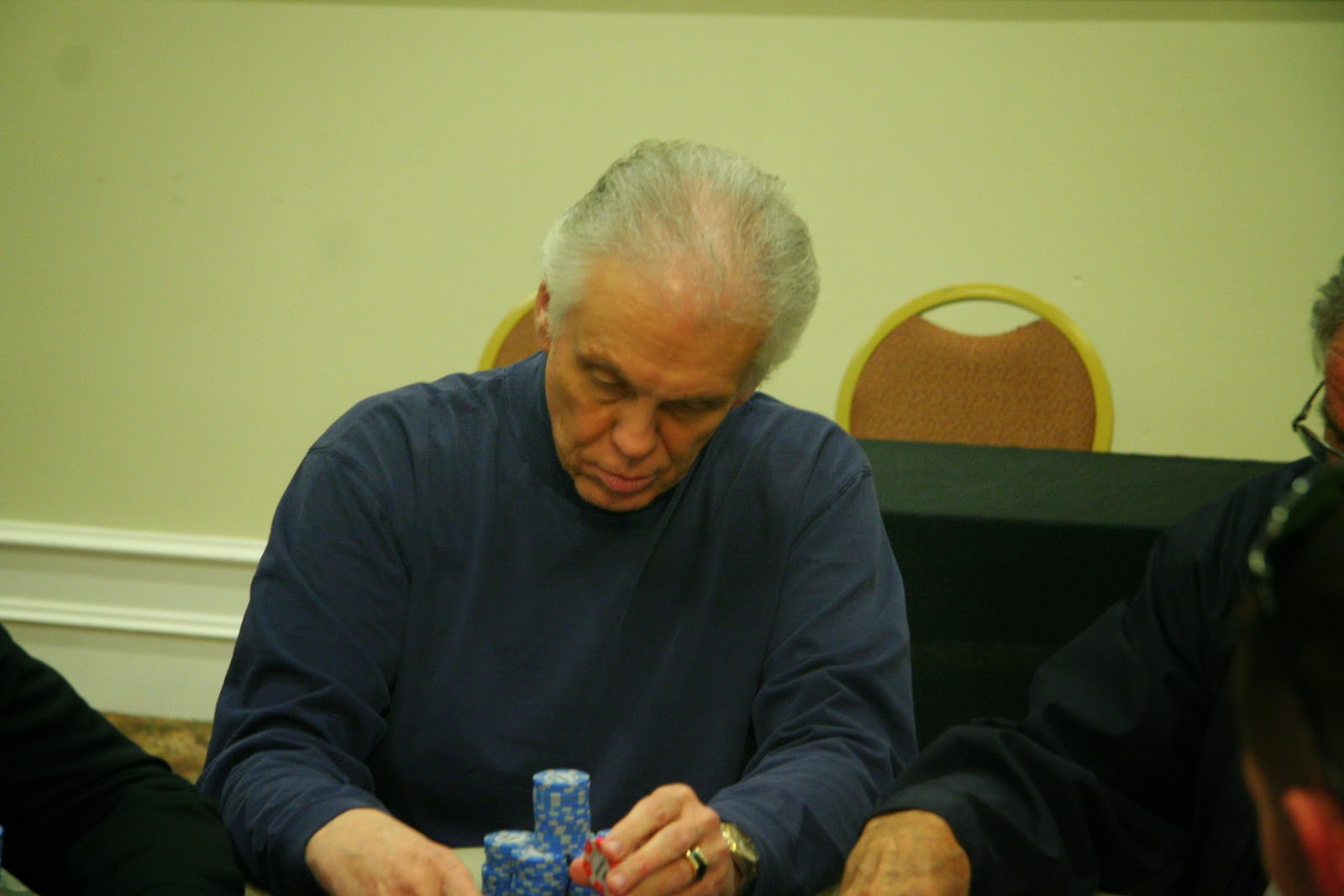 The action keeps coming at this final table, as we have lost another player just two hands later. James Mitchell open shoved from late position for 450,000, and Paul Lee shoved over the top on the button. The rest of the table folded, and Mitchell saw he was in big trouble.

Mitchell got little help on the [7c][4d][As] flop, but he did pick up some outs when the turn brought the [Ac]. However, the [3s] on the river missed him, and Mitchell was knocked out in seventh, while Lee vaults up to second behind Thu Nguyen.
Posted at 12:01 AM No comments: