Yaginuma registered late in the day yesterday after busting 19th in the $1,675 no-limit hold'em main event. He quickly amassed the biggest stack in the room and ended the day as the runaway chip leader.

When play resumed on Tuesday afternoon, it was more of the same for Yaginuma. He completely dominated the final table and was never short on chips. As the field was trimmed from 40 down to the final nine, Yaginuma's stack only kept growing and he started the final table with the chip lead.

He bested a final table that featured plenty of tough players. WSOP Bracelet winners Mike Leah and Barry Hutter were at the final table, as well as tough pros Ben Palmer, Michael Aron, and Joe Serock. Yaginuma navigated through the whole field and defeated Matthew Wantman heads-up to take home the title. 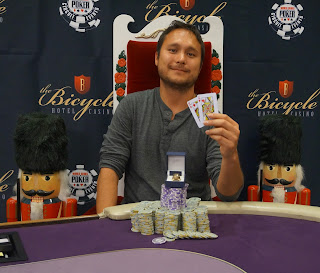 Yaginuma is a professional poker player from Maryland that now makes Los Angeles his home.


Local grinder Nikhil Gera came out on top of a stacked final table to emerge as the champion in the $1,675 no-limit hold'em main event.

Gera, a Psychiatrist by trade, is a poker enthusiast that is friends with some of the best players in the Southern California area. Gera had a rail that included Craig Chait, Peter Hengsakul, Nipun Java, and several other Los Angeles area grinders who were there to support there fellow local grinder.

He bested a field of 842 players to earn his first career Circuit ring and $246,295. He also earns a seat into next year's Global Casino Championship.

It wasn't an easy road to the title for Gera, who had to navigate through arguably one of the tougher final tables the WSOP Circuit has seen. Eddy Sabat, Ankush Mandavia, two-time WSOP Bracelet winner Tuan Le, and WPT Champion Harry Arutyunyan were all a part of this final table.

Those players hit the rail as the day moved on and the title came down to two local players: Gera and Paul Nguyen.

Nguyen had a massive chip lead throughout the final table, but Gera picked up steam and during the late stages of the final table and started heads-up play at only a slight chip disadvantage.

After a few hours of heads-up play, Gera took the chip lead and eventually picked off Nguyen's jack-high bluff with a full house to send Nguyen home in second place. It was all celebration for Gera and his rail after that. Nguyen takes home $152,190 for his second place finish.

Here is a look at the final table results: 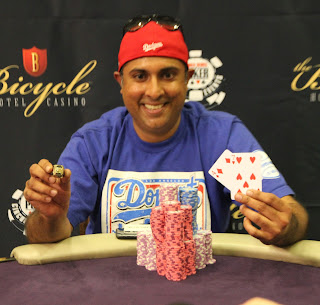 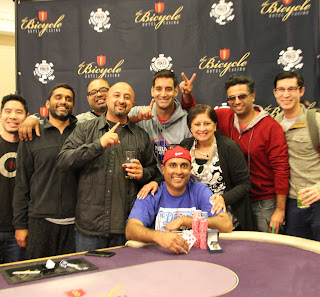 
There are 16 players left in the $3,250 no-limit hold'em high roller event and they have redrawn for seats at the final two tables (this is an eight-handed event).

This is also the bubble and hand-for-hand play has begun and will last until one more player is eliminated.

Jesse Yaginuma, Joe Serock, and Michael Aron are all bunched together at the top of the pack. All three have over 500,000 in tournament chips. When one more player is eliminated, the final 15 players will be guaranteed $6,535.
Posted at 12:08 AM No comments:

The $1,675 no-limit hold'em main event is down to its final 10 players and they have redrawn for seats at the final table.

Harry Arutyunyan is atop the chip counts with 3,900,000 and he is followed closely by Paul Nguyen and Ankush Mandavia.