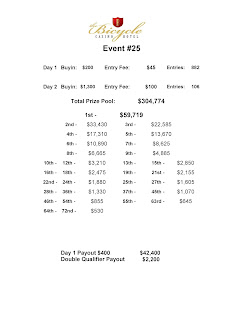 Cards in the Air: Day 2 Restart of the Monster Stack Event

The final day of the Winnin' O' the Green has just started up at the Bike. It is the Day 2 finals of the Monster Stack Event. Michael Ung leads the final 105 survivors today, but that field size will be growing, as Day 2 buy-ins will be available through the first two levels, or until about 2:45 PM today.

If we need to go to a third day, that will be played out tomorrow at 1 PM. Good luck everyone!
Posted at 1:00 PM No comments: 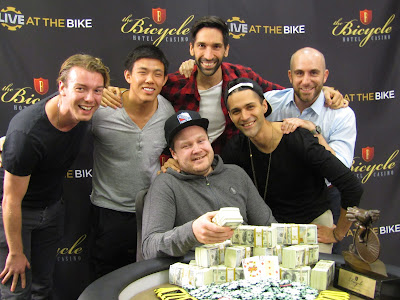 Another exciting Mega Millions tournament wrapped up yesterday, and when the dust settled, it was Swedish pro Jonas Hagstrom who emerged victorious over the massive field. For his efforts, Hagstrom took home over $311,000, a Bicycle Casino trophy, and will get his face on the next Mega Millions banner in the tournament room. After the win, Hagstrom appeared to be relieved, and at a loss for words.

Hagstrom was one of the short stacks for most of the final table, as slower play in big hands led to some shallow stacks. Hagstrom stayed patient, and told us that he made some plays he might not normally have done had the situation been different.

"I was waiting for good spots I made some pretty big folds early on where I would usually play the hands but I just ran good at the right time." 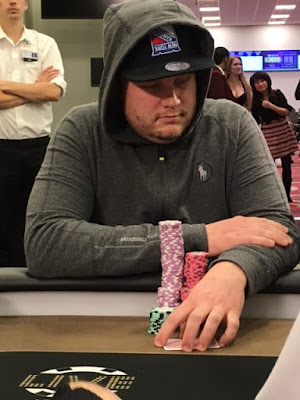 Hagstrom started his push when he eliminated Keyue Wang in sixth place, with pocket Aces against her Ace-King. From there, Hagstrom continued to lay low until three handed, when he won all of the meaningful pots. First, he doubled up with pocket Kings against Xiao Ruan. Then he won a monster flip to eliminate Massoud Eskandari, who had the chip lead for most of the final table.

By the time they got to heads up play, Hagstrom had nearly all of the chips. His opponent, Xiao Ruan, got his money in good with pocket Tens, but Hagstrom's King-Three suited caught up on the river, sending Hagstrom and his friends on the rail into a frenzy.

Hagstrom is mostly an online player who told us that a friend of his tipped him off to this event, and it ended up being quite a good tip.

"I've been playing some live cash so I have experience with that but of course it's way different than online. I live in Sweden. I didn't come here for this tournament I came here to hang out with friends and play some live cash but my friend told me about this tournament and I can say I'm happy I played it."

This is by far Hagstrom's biggest live cash, and he told us after the win that it might force him to change his plans for this summer.

"Yeah I wasn't planning on going to Vegas but now maybe I have to play some more."

Lastly, we asked Hagstrom if he would be coming back to America to defend his title. His answer got a raucous reaction from those still in the room.

"I'm going to have to come back and defend it right?" he said with a smile. 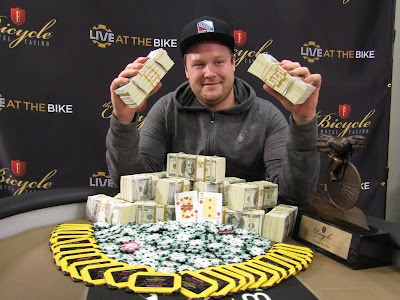 Congratulations again to Jonas Hagstrom on his incredible outright victory. Thank you once again to everyone who came out to the Mega Millions, and the entire Winnin' O' the Green series.

After the Day 2 finals of the Monster Stack $200,000 Guaranteed Event today, we will have daily tournaments running until the start of the Summer Series in June. See you guys then!
Posted at 10:41 AM No comments: