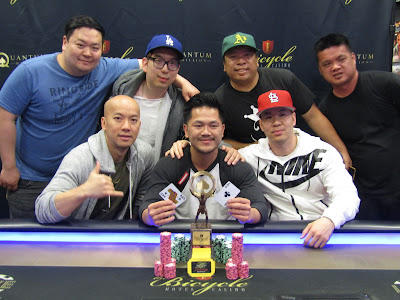 We caught up with Tuan Mai last night after his dominating victory at the Mega Millions XX final table. With a few of his friends by his side, Mai was all smiles, and seemed very appreciative of the moment.

"It feels amazing it feels great. I fired the last bullet I wasn't even supposed to play the tournament. And I took it down."

Indeed he wasn't supposed to play. In town for just a few days, he was planning to go to Vegas for a different event, but was convinced to stay by a friend who ended with a piece of the winning score.

"A few of my buddies played and I was on my way back to Vegas for the $1,700 Bally Main Event and I told my girlfriend this is probably a better prizepool so I played it. I only had $250 on me my buddy had to zelle me $300 to get in. And I didn't pack enough clothes I've been wearing this for three days!"

Mai came into the final table with the chip lead, and he went wire to wire with it, all the way up to heads up play, where he chopped with runner up Cody Bell.

"I never lost the lead Turbo got close but I hung on the whole way. I'm a beast man. I beasted the whole final table!"

Mai said that for him, this is life changing money, and it couldn't come at a better time, with that big series in Las Vegas coming up shortly.

I'll probably play alot more now. The WSOP is around the corner. Probably going to put some volume in for the next few months."

When asked if he would be coming back to defend his title at the Legends of Poker in August?

"Most definitely I'm coming back to defend my title. It was a great tournament you guys put on."

Congratulations again to Tuan Mai, and all of the final table players, on their impressive runs and results. See you guys again for the Summer Series which kicks off on June 1st! 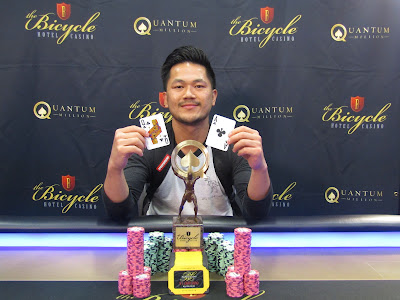 Congratulations to both players on their impressive showings here today, and thank you to everyone who came out to play Mega Millions XX. We will see you guys once again in June for the Summer Series!
Posted at 12:53 AM No comments: